The Ames Intermodal Facility was funded at $8.463 million under Phase I and is on schedule to open on June 15, 2012.  However, significant elements were removed from the Phase I construction; therefore, project partners (CyRide, Iowa State University and City of Ames) have decided to apply for additional grant funding under subsequent TIGER program Phase II.  CyRide would need to secure an additional $8-10 million in federal/state dollars to complete the facility's vision as desired by the community.  The following remaining elements of the vision are currently unfunded and included in Phase II:

TIGER II - In April 2010, the U.S. Department of Transportation released a Notice of Funding Availability for a second TIGER grant opportunity. The DOT refers to this grant as the TIGER II Discretionary Grants of which $600 million was available through the FY 2010 Appropriations Act. For projects to be considered for the TIGER II program, the federal request must be at least $10 million and include a 20% local match. The phase II project elements, budget and benefits from the project proposal were discussed with the community at a public meeting on Monday, August 2nd; 5:30pm at the Memorial Union's South Ballroom. The materials (Public Meeting Presentation  and Meeting Handout) were discussed and public comments were obtained from the community.  CyRide submitted a TIGER II grant, shown below, on August 23, 2010 for the elements needed to complete Phase II. CyRide was not approved for TIGER II funds, but the proposal that was approved to submit can be viewed here. 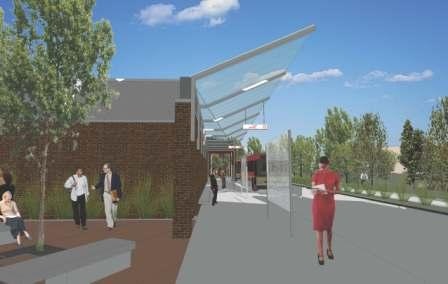 TIGER III - On July 1, 2011, the U.S. Department of Transportation released yet another Notice of Funding Availability for a third TIGER grant opportunity. Approximately $527 million is available through the FY 2011 Continuing Appropriations Act.  Projects must; again, request at least $10 million in federal funding and have a 20% local match. Discussions with the project partners have transpired over the summer of 2011 to submit another application in October 2011 similar to the TIGER II request to fully realize the full project concept.  The goal would be to:  1) Connect the Intermodal Transportation Facility with CyRide's transit system operating throughout the Ames community via a CyRide shuttle into ISU campus, and 2) Fund the remaining unfunded elements of the project identified above for Phase II.

The grant proposal and supportive documentation linked within the application submitted in late October 2011 can be viewed below:

TIGER IV - On January 31, 2012, (six months after the TIGER III Notice of Funding Availability - NOFA - announcement), the U.S. Department of Transportation released yet another NOFA for a fourth TIGER grant opportunity. This time the $500 million is available with similar requirements to TIGER III.  The project partners agreed to try again for this discretionary funding to fund Phase II of the facility to complete the vision.

For additional information regarding the Ames Intermodal Facility efforts (Phase I or Phase II), please contact Shari Atwood (Transit Planner) at satwood@cyride.com or 515-292-1100.